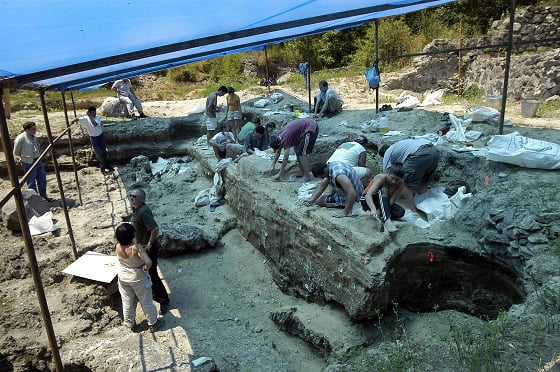 Dmanisi is a townlet and site of paleoanthropological excavations in Southern Georgia approximately 93km southwest of the nation’s capital, Tbilisi. Being a site of a medieval village located on the promontory at the confluence of Mashavera and Phinezauri River, Dmanisi is one of the most important archeological places not only in Georgia, but in the World. Discoveries made on the territory are of crucial importance in the study of Human Evolution.

Archeological excavations of the ruins on Dmanisi area began in the 1930s, but systematic excavations were not undertaken until the 1980s. Very soon it became obvious that these cellars and pits dating from the medieval times contained prehistoric animal and human bones. The jawbone was found in 1991 and two skulls were recovered in 1999. These fossils were very close in their morphology to similarly aged specimens from Eastern Africa.

These animal and human bones are found with numerous tools and flakes coming from layers of ash and sandy sediment. That’s why they can be dated as about 1.8 million years old. There are also other methods of dating which indicates that mandible and crania must have washed into the site approximately 1.7 million years ago.  They are believed to be subspecies of Homo erectus. Dmanisi is thus one of the most ancient human settlements anywhere in Eurasia.