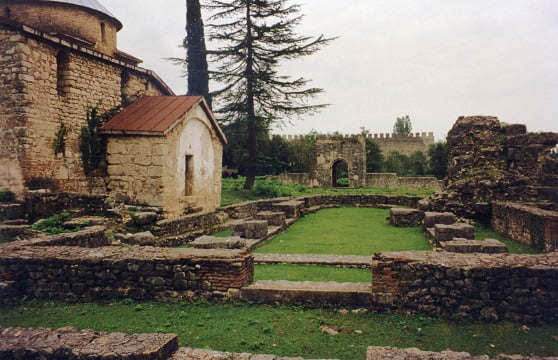 Nokalakevi is a village and archeological site in the Senaki Municipality. It is also known as Tsikhegoji (Fortress of Kuji). Nowadays there are only impressive ruins of this ancient place nestled by the picturesque river Tekhuri, on the northern edge of the Colchian plain in Samegrelo.

This archeological site of Nokalakevi-Archeopolis occupies some 20ha and played a pivotal part in the major wars fought between Byzantines and Sasanians in the South Caucasus during the 6th century AD. It was one of the key fortresses guarding the kingdom of Lazika (modern Samegrelo) from Sasanian, Persian and Iberian attack.

Intensive archeological study and works at the site began in the second half of the 19th century.  Swiss philologist Frédéric Dubois de Montpéreux visited the place, identified the ruins of the ancient fortress and argued that it was an ancient city Aia, ancient capital of the Colchian kingdom also mentioned in the myth about Argonauts. This stimulated scholarly interest about the archeological site and in the following decades a lot of teams of scholars and archeologists began to come in Georgia and visit Nokalakevi. Frédéric Dubois de Montpéreux’s opinion was not confirmed and most scholars continued and still continue to prefer the traditional identification of Aia with Kutaisi.

The archeological excavations were interrupted by the political upheavals and onset of war in the 1930, but the interest in Georgia’s history continued to grow and prompted various visits and articles about Nokalakevi and its archeological importance. Among the expeditions set up here the most important are: expedition in 1973 which undertook major excavations and conservation work at Nokalakevi until 1990s. Then the collapse of the Soviet Union and civil disturbances in Georgia caused serious damage to the expedition’s infrastructure. Long scale excavations were resumed in 200. It was a collaborative project headed by a Georgian professor David Lomitashvili and Anglo-Georgian expedition to Nokalakevi, which had trained over 100 archeologist students from nine different Georgian and British universities, plus volunteers from different countries.