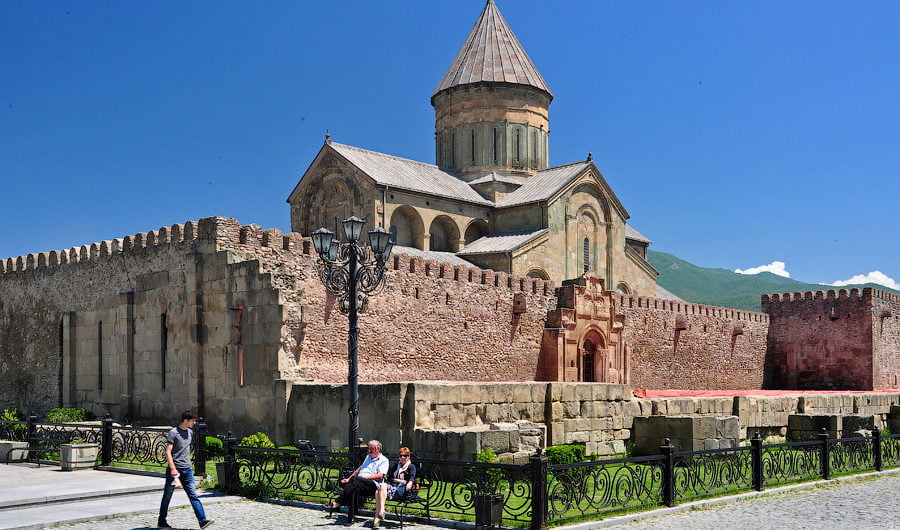 Svetitskhoveli cathedral is a Georgian orthodox church situated in the ancient historical town of Mtskheta , 20 km northwest from Tbilisi. This cathedral is known as the burial place of Christ’s mantle.  According to Georgian hagiography, in the 1st century AD a Georgian Jew named Elias was in Jerusalem when Christ was crucified. He managed to buy Christ’s mantle from a Roman soldier and bring it back to Georgia. When he returned back to Mtskheta, his native town, his sister Sidonia met him and after touching the mantle she immediately died from the emotions engendered by the sacred object. The robe could not be removed from her grasp and she was buried with it. This place where Sidonia is buried with the mantle is persevered in the cathedral.

Later on a cedar tree was grown from her grave. The tree was chopped down and St. Nino made from it seven columns for the church’s foundation. The seventh column had magical properties: it rose itself in the air and returned to earth only after St. Nino prayed the whole night. (Hence the name “Svetitskhoveli”). In Georgian Sveti means “pillar” and “Tskhoveli” means “living.”

The original church was built in the 4th century AD during the reign of Mirian III of Kartli, byt the original cathedral has been damaged several times during the history notably by the invasions of Arabs, Persians, Timur and lately by Russian subjugation and the Soviet period. The building has also been damaged by earthquakes.

Restoration period began in 1970 during which the base of basilica built during the reign of Vakhtang Gorgasali after St. Nino was found. Basilica was the dominant type of the Georgian church architecture before the cross-dome style emerged. When Svetitskhoveli was rebuilt in the 11th century, this type of cross-dome was chosen by the architect Arsakidze and Catholicos-Patriarch Melkisedek of Georgia. During the reign of the king Erekle II a defensive wall was built around the cathedral in 1787. The top storey was designed for military purposes and that is why it has gun emplacements. Also it is worth mentioning that archeological expeditions conducted there found the house of Patriarch of the 11th century.

Svetitskhoveli cathedral is the second largest church in Georgia after Tbilisi holy trinity cathedral. It is listed as an UNESCO world heritage site along with other historical monuments of Mtskheta.