The history of Georgia 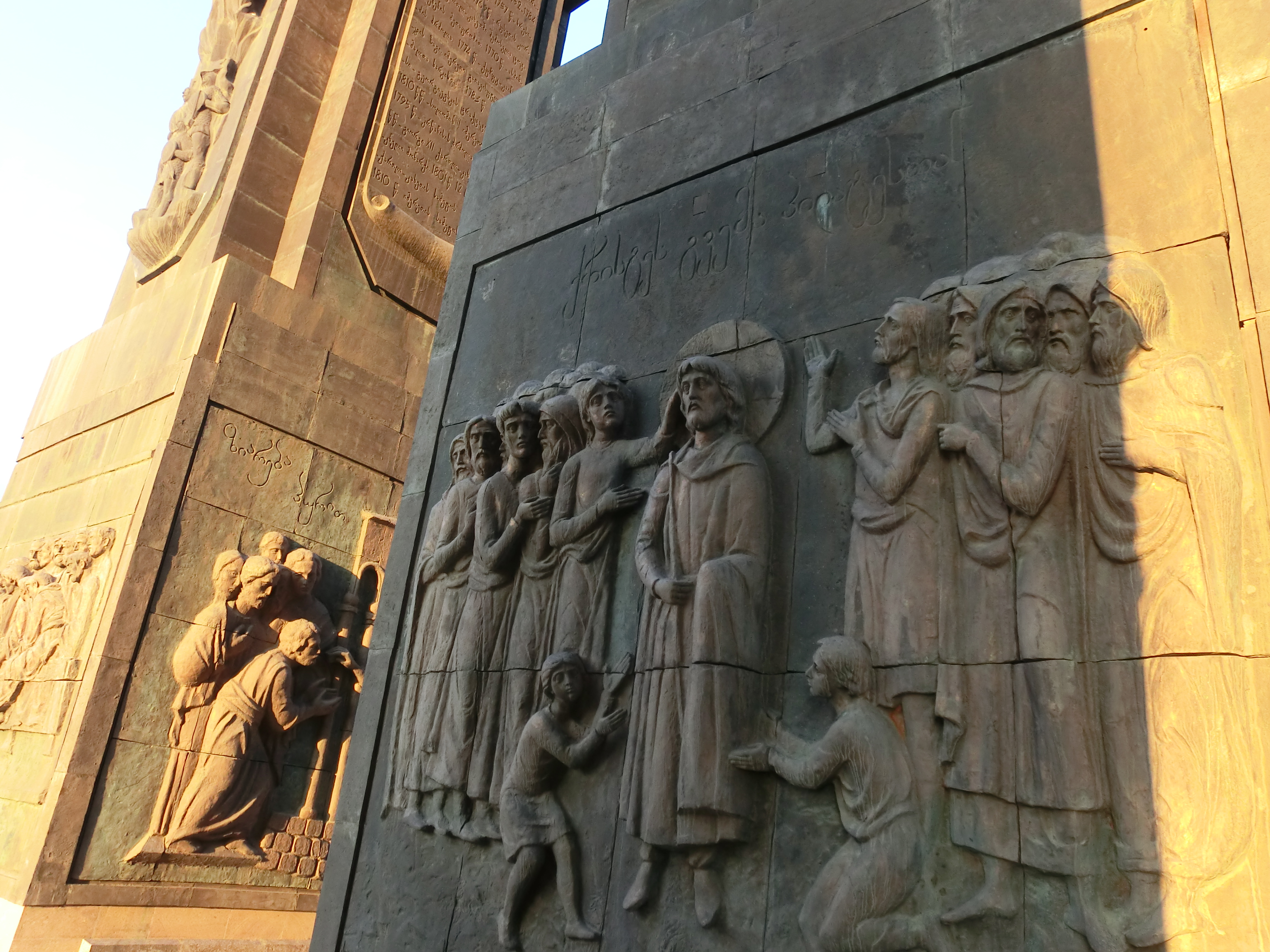 Georgia has a very long history. Evidence of the earliest occupation of present day Georgia was discovered in Dmanisi in 1991 and dates back to 1.8 million years ago. This is the oldest evidence of humans anywhere outside Africa. This unique discovery proves the fact that humans began their migrations  about 1.8 million years ago.

From the prehistoric period of Georgia Kura-Araxes’ culture is worth mentioning. Georgia and Asia Minor were home to this culture and then it gave way to Trialeti culture in the second millennium BC.

One of the important tribal unions on the territory of Georgia was Diauehi appearing in written history in the 12thn century BC. This union had very advanced political and economic systems characterized by metallurgy and goldsmith techniques of high level. It was the very period, when proto-Kartvelian people began to break up into several branches and that finally led to the formation of modern Kartvelian languages: Georgian, Svan, Megrelian and Laz each of them used in different parts of Georgia. Svans were dominant in modern Svaneti and Abkhazia; Zans mostly inhabited the modern region of Samegrelo, east-kartvelian groups inhabited eastern part of the country etc. By the 8th century BC. two core areas of Georgian culture were formed; eastern one called Iberia and Western part of the country-Colchis.

Colchis was another very important tribal union, which emerged in the 13th century BC on the black sea coast. This tribal union is regarded as one of the earliest state formations on the territory of the country and the term “Colchetians” was used as a collective term for Mingrelians, Chans and Zans inhabiting on the east coast of the black sea.

The tribal union of colchis was well-known war Greek people as it is mentioned in the myth about Argonauts. The kingdom of Colchis was the very place, from where Jason, a Greek prince stole the Golden Fleece. Colchis and Iberia were very strong tribal unions and the earliest state formations. They witnessed the successive invasions from Median Empire and later from the Persian Empire. Iberia also witnessed the invasions from Alexander the Great but neither Iberia nor Colchis was incorporated into the empire of any successors. However, the culture of ancient Greece had a considerable influence on the regions, especially on the Kingdom of Colchis.

Georgia was among the first countries in the world to adopt Christianity. The Eastern Georgian kingdom Iberia converted to Christianity in 327 AD when the king of Iberia Mirian III established it as the official state religion. According to the Georgian chronicles, St. Nino of Capadocia converted Georgia to Christianity in 330. Therefore, the date varies based on numerous historical documents and accounts, but it is a proved fact that by the 4th century both kingdoms of Lazica and Iberia adopted Christianity as the official state religion. This adoption tied the country to Byzantinbe Empire which had strong cultural influence over it. During the 4th and 5th centuries, Iberia came under Persian control and governors appointed by Shahs ruled the country. When Vakhtang Gorgasali proclaimed himself as a king in 5th century, Georgian statehood was restored, but it did not last a long time. After his death Iberia became province of Persia. In late 7th century the Byzantine-Persian rivalry gave way to Arab conquest. Georgia and especially eastern parts of the country were under political domination of Muslim Arab rulers about 4 centuries.

The first united Georgian monarchy was formed in the 9th and 10th century. Firstly, the kingdom of Tao-Klarjeti was raised in the 9th century, when Ashot Courapalate of the royal family of Bagrationi liberated the parts of the southern Georgia from Arabs. In the 10th century Courapalate David invaded the earldom of Kartl-Iberia. After 3 years Bagrat III inherited Abkhazian throne after the death of his uncle Theodosius the Blind, king of Egrisi-Abkhazia. Then Bagrat annexed Kakheti and Erti and became the first king of united Georgia.

The second half of the 11th century was marked by the invasions of Seljuq Turks. They built a huge nomadic empire and by 1081 Armenia, Mesopotamia, Syria and most of Georgia had been conquered and devastated by them. Only mountainous regions of Georgia remained out of Seljuq control and served as safe havens for refugees. Georgians began struggle against them under the rule of the young King David IV of the Bagrationi Royal family. He created the regular army in order to be able to resist Seljuqs’ colonization of Georgia and in the end of 1099 David stopped paying tribute to Seljuqs. He liberated most parts of Georgia except Tbilisi and Hereti. Later he took over Hereti and Seljuq-controlled Shirvan. In 1022 Davidd took over Tbilisi after defeating Seljuq-army in Didgori battle. The period of his reign was one of the most successful periods in the history of Georgia. The king is called Agmashenebeli (English: builder).

David Agmashenebli’s successors continued his policy of Georgia’s expansion. One if the notable kings of the period is Queen Tamar. Her reign represented the peak of Georgia’s might in the whole history of the nation. She began new Turkish invasions and as a result, most southern Armenia came under Georgian control. Also she conquered the former territories of Byzantine Lazona and Paradria. They were transformed into the empire of Trebizond. Georgian armies also invaded northern Persia. That is why Georgian historians often refer to her as “Queen Tamar the Great”.

The 13th century was a period of Mongol invasions. In spite of the resistance by Georgian-Armenian armies, Mongols managed to conquer the most parts of Georgia and Armenia. Mongol invasion period lasted more than half a century and it was marked by the struggles of Georgians against the Mongols for independence. These struggles ended without success.  Finally the king George the Brilliant stopped paying tribute to Mongols and restored the pre-1220 borders of Georgia. He also returned the Empire of Trebizond into Georgia’s sphere of control. The period of peace and success did not last for a long time and two major powers emerged against Georgia: Ottoman and Persian empires. Ottoman Empire was encroaching from the west and Persian Empire from the east. For the next decades, Georgia would become the battleground between these two rival powers and Georgian states would struggle to gain independence. By the 17th century, eastern and western Georgia had sunk into poverty because of the constant warfare.  The economy of the country was in very bad conditions. That is why King Erekle II turned towards Christian Russia for protection from Ottoman and Persian attacks. The Russian Empress Catherine the Great was keen to have Georgians as allies in her wars against Turks. Russian Empire helped Georgia against Ottoman and Persian Empires, but several parts of Georgia were annexed to Russian the Empire. Georgia was unified for the first time in centuries but had lost its independence.

Georgia lost its independence in 18th century and Russian authorities tried to integrate Georgia in the Russian Empire. In the second half of the 19th century, there was a growth of the national movement. Georgians were dissatisfied with tsarist autocracy and Armenian economic domination, which led to the development of a national liberation movement. Georgia was one of the first countries proclaiming the establishment of the independent Democratic republic of Georgia. The independence period lasted only three years, 1918-1921. In February 1921 Georgia was invaded by the red army. The country was forcibly incorporated into the Transcaucasian SFSR comprising Armenia, Azerbaijan and Georgia. Soviet rule was so harsh and Georgia with other SFSR countries had very hard times, but Soviet power and Georgian Nationalism clashed in 1978, when Soviet Moscow ordered revision of the constitutional status of the Georgian language, as a Georgia’s official state language. Soviet troops were used to break up peaceful demonstration at the government building in Tbilisi. Twenty Georgians were killed and hundreds of them wounded and poisoned. After that began pressure oppositions on the communist government manifested in popular demonstrations and strikes. These ultimately resulted in an open, multiparty and democratic parliamentary election, where Table/Free Georgia captured 54 percent of the proportional vote. The leader was dissident Zviad Gamsakhurdia, who did not waste time in organizing a referendum on independence. It was approved by 98.9% of the votes. Formal independence from the Soviet Union was declared in 1991, April 9.