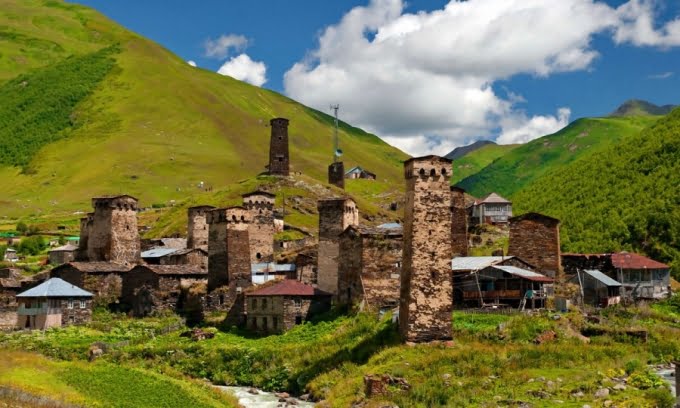 Ushguli is a community of villages located at the head of the Enguri gorge in Upper Svaneti, Georgia.

Also, Ushguli comprises four villages: Zhibiani located at an elevation of some 2100 meters above sea level, Chvibiani, Chazhashi and Murqmeli.

Foremore, Ushguli is located at the foot of Skhara, which is one of the highest Caucasian summits.

In addition, number of families inhabited here is about 70 (about 200 people).

They support a small school.

The snow cover Ushguli area by for 6 months of the year and often the road to Ushguli is impassable.

The characteristic landscape of Upper Svaneti :

Characteristic landscape of Upper Svaneti is formed by small villages .

Georgians dominate those small villages by the towers and situated in the mountain slopes with a natural environment and snow-covered mountains.

The most notable feature of the settlement is the abundance of towers, especially in the frontier villages such as Ushguli and Latali.

These towers usually have from three to five stores and a slender, tapering profile.

Also, upper floors of these towers are exclusively defensive in function serving as platforms for observation and for storing.

As for the houses, they are usually two-storeyed.

In addition, the ground floor is a single hall with accommodation for both people and animals .

Also, they separated oftenly the second floor by a wooden partition and they always decorate it .

Furthermore, The villages contain buildings that are part of the UNESCO World heritage site of upper Svaneti.

In general, interest in the monuments of Upper Svaneti began in the 19th century.

As for the systematic scientific research, it began in the 2nd decade of the 20th century.

Georgians created The Museum-Reserve to preserve one village in its original form without any modern intrusions.

Also, Some of the inhabitants chosed to stay in the old buildings .

However, they provided those old buildings with the necessities of modern life.

In conclusion, Georgians architectes restored and furnished Some of the unoccupied houses as well .